Our man in Walthamstow howls at the moon 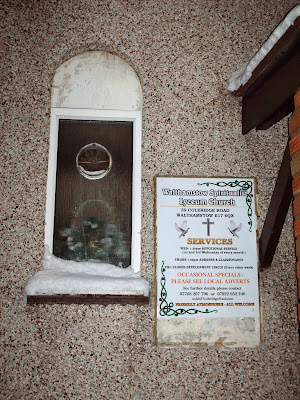 Walthamstow has an archipelago of public footpaths with little or no access to motor vehicles. Situationists might think of these paths as the remnants of a language of place; a poem or song missing lines and, in some neighbourhoods, whole verses.
The paths can be serene fragments; interludes offering respite and sanity in a locale (or consciousness) addled by the domination of the motor car. Some of the paths appear unsigned, nameless; nowhere between somewhere or other - liminal passages. How did I make a personal discovery of another new path this evening?
Was I lured and led, dog (or fox) like, by my snout to this path’s soup - no - this path’s virtual unguent of fats, Sunday roasted, back door belched, a milieu of fugitive kitchen aromas?
Earlier in the day I’d watched foxes sniffing at my (landlord’s) snow and ice clad back garden. They pecked around for the mealworms, morsels I’d scattered for the song birds. In the frosted winter daylight, the foxes were quiet and bedraggled. There was none of their balmy summer evening caterwauling to disturb the peace of this wintry hinterland.
I was bored and appalled by the confines of the centrally heated air in my (landlord’s) bed sitting room. I set out for a walk to get some fresh air, to follow my nose, to inhale; nowhere smells like Walthamstow. So what sort of dog am I?
And who was I via the diversions and delusion of this particular evening excursion? Perhaps I was ‘Guy de Bord’, seeking astonishment on the terrain of boredom, venturing as far as an affected appropriation of ‘flanerie’. I berated and resisted the surreal labyrinth of Reynard the Foxes’ pungent imagination; until, that is, I lost myself (?) on a path between a Tennessee Fried Chicken joint and the Walthamstow Spiritualist Lyceum Church. I was nowhere to be found on all fours, ‘sniffing at every risk filled corner for a rhyme’.
Having given up on reason, I fancied myself as ‘Charles Baudelaire’, ‘flaireur’ reincarnate, sniffing on a chicken bone, yapping at the nearly full moon.
Posted by Field Study's Man at 19:10